Bryn Van Hiel II was born October 3, 1937.  His father was Bryn Jhan Van Hiel and mother Elsie Van Hiel.  Bryn II grew up in Los Angeles and graduated from Marshall High School.  He received his B.S. Mechanical Engineering from Cal Poly San Luis Obispo in 1959, and his Masters Degree from USC in 1961.

In 1954, Bryn II was recruited by Westinghouse but decided (possibly coerced by his parents) to join his father in the foundry business. Bryn II quickly introduced Centrifugal Castings into Techni-Cast, which was a sand cast foundry originally, and soon phased out sand castings totally. After his fathers passing, Bryn II moved Techni-Cast to it’s current location, in South Gate, in 1971.

Bryn was  always an innovator. Looking for new markets and looking to gain any competitive edge by innovative mold design, investing in forward thinking technology and staying ahead of regulatory issues.  He also the first, in the foundry industry, to design and install a co- generation system in California, a system which has provided untold benefits to Techni-Cast.

In 1972, Bryn was a driving force behind the creation of the California Metals Coalition.  Bryn received CMC's highest honor, the Tetzlaff Memorial Award, in 2020.  He also dedicated his time to help create the CFHI in 1997.

Bryn II is survived by his wife Lynne and sons Don and Jhan (who now run Techni-Cast).

In lieu of flowers or gifts, the Van Hiel family has asked for donations to the California Foundry History Institute (CFHI). 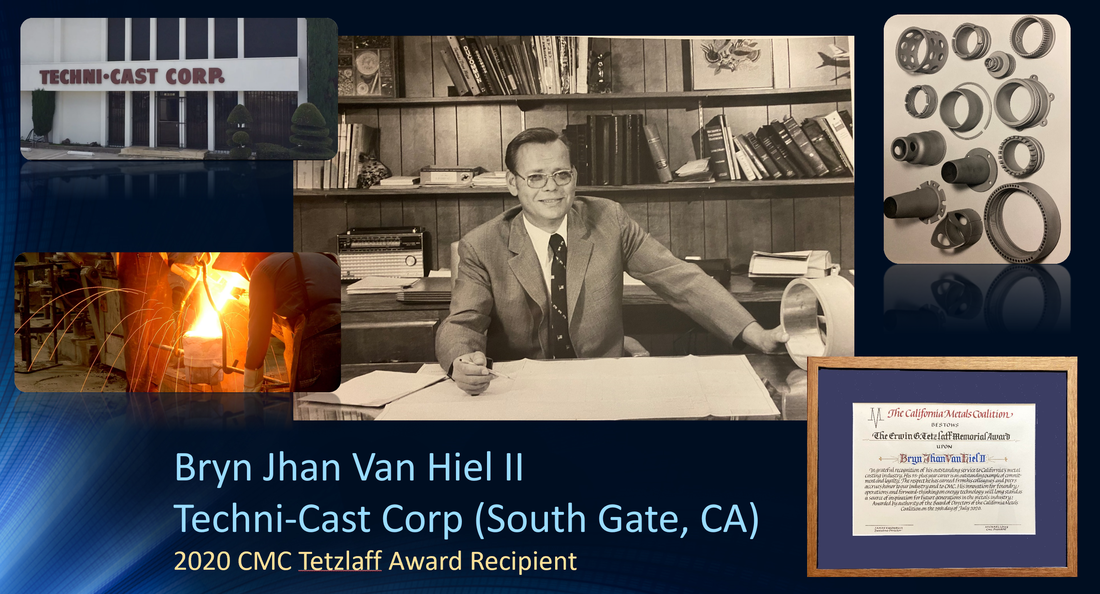